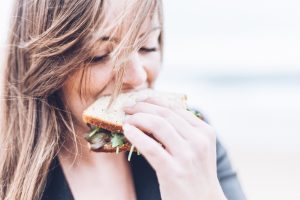 Simply following a calorie-restricted diet is unlikely to lead to long-term weight loss. Many health experts attribute this to reasons such as low satiety and adherence to a diet over an extended period of time.

But what if there was an approach to weight loss that didn’t require the forbidding of foods or severe restriction of calories? That’s where mindful eating and proper chewing of food can come into play.

Most dieters struggle with conventional weight-loss diets. They have problems with maintaining their new eating patterns and ‘give in’ to food cravings. Mot dieters will regain most of their weight loss after a year.

There are many suggested reasons for this pattern of behaviour. Some may not be able to reach satiety with a significant calorie restriction, and over time, their hunger takes precedence over the diet. For others, it can be more of an emotional or psychological issue, as breaking habits around emotional eating and cravings can prove difficult.

Mindfulness and mindful eating shift the patient’s focus from weight loss. Instead, they focus on the experience of eating. By eating mindfully at a slow pace, people are able to focus on the sensations during food consumption. This could lead to an indirect reduction of calories, as well as reduced cravings and emotional eating behaviours.

Researchers set out to explore the influence of mindful eating on weight loss, cravings and eating behaviour such as emotional eating.

The intervention group saw a reduction in BMI, with an average drop of 1.12 over the 8 week period. Participants reported eating less often due to negative emotions (emotional eating) and eating when given an opportunity (external eating). But they also saw an increase in eating due to hunger and ceasing when satiated (intuitive eating). There was a significant reduction in food cravings.

Weight loss in the intervention group was maintained when they were followed up 4 weeks after the trial.

The researchers concluded that a combination of mindfulness and prolonged chewing had a significant impact on weight loss and related eating styles. The intervention was able to reduce less desirable eating behaviours while encouraging a more intuitive approach to food.

They stated that one of the benefits is that this approach steers away from consciously restricting calories and a sensation of deprivation. Instead, it fosters enjoyment and the tasting of food.

Further research is required to explore the effect of mindful eating and chewing in conjunction with other weight loss diets to see if they improve outcomes for participants.

If this is the first time you’ve heard the term ‘omics’, take note. You’re about…

Many people use their smartphone regularly throughout the day for a variety of uses, from…

The Impact Of Weight Loss On Mortality In Obese Adults